Besides, if you were one half evil, wouldn’t you want to know about the other half?

In the scorching summer of 1976, Robyn spends her days swimming at the Lido and tagging after her brother. It’s the perfect holiday – except for the crying women her mum keeps bringing home.

As the heatwave boils on, tensions in the town begin to simmer. Everyone is gossiping about her mum, a strange man is following her around, and worst of all, no one will tell Robyn the truth. But this town isn’t good at keeping secrets…

Twelve years later, Robyn returns home, to a house that has stood empty for years and a town that hasn’t moved on, forced to confront the mystery that haunted her that summer.

And atone for the part she played in it.

A Little Bird Told Me is the kind of novel that I absolutely love. Two time frames that you are equally drawn to and whose stories you can move between effortlessly. Marianne Holmes writes both timelines so convincingly that you really feel that you’ve spent time in these worlds, making it very hard to pull yourself away. It’s a novel made for long autumn afternoons and I got lost in it over a relaxing weekend in Comrie earlier this month.

This is an engaging read with lots going on beneath the surface. Robyn’s life, in a small town where adult life seems like a mystery waiting to be solved, has been perfectly created. Robyn has deliberately cut herself off from things she can’t bear to think too closely about and her isolation draws us into her world whilst holding us at arm’s length too, which Robyn does to everyone – even her own mother. The secrecy is such a fantastic technique to draw us closer to Robyn; I found myself watching her every movement to see if I could catch a glimpse of whatever she was hiding. Her secrecy hints at the emotional damage that occurs as this tale unfolds – and Marianne Holmes leaves us to guess about what’s going on alongside Robyn – a very clever method of keeping us connected to her. 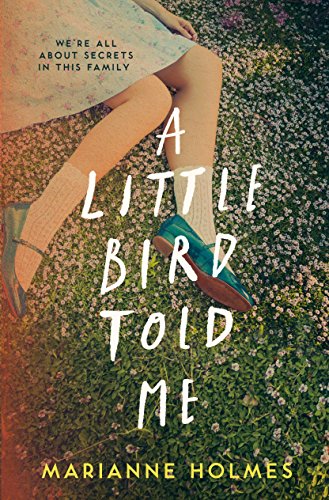 Robyn’s world is upended by a strange man who follows her as she tags along after her brother, which spells the beginning of some very mysterious goings-on. This part too is convincingly conveyed – without being over the top or stretching our belief in Robyn’s story. Her subsequent journey to unravel the secret that’s been locked away for years is a fascinating and unputdownable one which really brings the setting to life and allowed me to lose myself in its twists and turns whilst remaining wholly connected to Robyn and her long-held secrets.

I often find that dual narratives can result in you flicking forward to the one that you found more engaging. Not so here. There was a pleasing balance of the past and present and both timelines were so well-drawn that I felt like I could immerse myself in both and wanted to dedicate my attention to the way that one affected the other, rather than feeling that one overwhelmed the other. The 1970s setting is an intriguing one for me as it’s when I grew up too – so I really loved time travelling into my own past within these pages.

The atmosphere of secrecy and drama is perfectly maintained throughout this wonderful novel; the perfect recreation of 1970s Britain was a sheer pleasure and was something that I wanted to read more about as soon as I’d finished reading A Little Bird Told Me.  Even though I was reading it in Scotland in Autumn, I felt this summer setting come vividly to life as I walked in the footsteps of these characters and experienced their compelling  stories

Holmes is such a talented voice. She draws the reader into her characters’ worlds and makes them live for us as we read. If you enjoy a good read with a wonderfully evocative setting and a really vivid portrait of an era, then you’ll absolutely love this book. Buy yourself a copy here The Kindle edition really is going for a song!

Marianne Holmes was born in Cyprus to RAF parents and bounced between the UK, Germany, Kuwait and Belgium until firmly basing herself in London – well, apart from those years in the Peak District. A love of language led to degrees in Classics and Linguistics from the University of London but her desire to pay the mortgage steered her to a career in Marketing. After distracting herself in all sorts of ways over the years – sailing, flying, volunteering and running away to India – she is now definitely, absolutely concentrating on her writing. Well, that and making sure her children get fed, clothed and entertained. Obviously. A Little Bird Told Me is Marianne’s first novel.