Alison has it all. A doting husband, adorable daughter, and a career on the rise – she’s just been given her first murder case to defend. But all is never as it seems…

Just one more night. Then I’ll end it.

Alison drinks too much. She’s neglecting her family. And she’s having an affair with a colleague whose taste for pushing boundaries may be more than she can handle.

I did it. I killed him. I should be locked up.

Alison’s client doesn’t deny that she stabbed her husband – she wants to plead guilty. And yet something about her story is deeply amiss. Saving this woman may be the first step to Alison saving herself.

I’m watching you. I know what you’re doing.

But someone knows Alison’s secrets. Someone who wants to make her pay for what she’s done, and who won’t stop until she’s lost everything…. 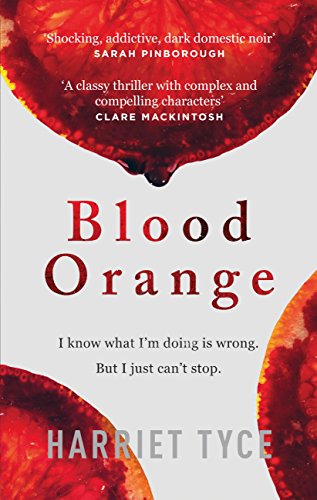 Blood Orange was my first read of 2019 and I’m not exaggerating when I tell you that this book is seriously going to take a lot of beating as my top read of the year. I was totally bowled over by this sparkling debut novel and have been telling absolutely everyone about it since the minute I finished it.

Blood Orange has been wowing readers since it burst onto the scene and once you’ve read it, you’ll definitely see why. Alison’s story combines all of the necessary ingredients for a compelling read: sex, crime, lust, betrayal, duplicity and murder – you can see why I read it in one breathless afternoon in the Christmas holidays, both desperate to finish it and never wanting it to end.

The fact that Harriet Tyce practised law herself means that I was even more caught up in this story as everyone who knows me is well aware of the lure of a gripping crime story and courtroom drama – Blood Orange successfully mingles this with the darkest of domestic noir stories and manages to keep it completely believable at the same time, which I’m sure you’ll agree is no mean feat. Ignore the imitators, this is the real thing and I guarantee that as soon as you open its first page, you’ll be inventing every excuse under the sun to shut yourself away until you’ve finished the final chapter.

Even though many people have been comparing it with The Girl on the Train or Apple Tree Yard, I got more of a vibe of classics by Ruth Rendell/ Barbara Vine as I read Blood Orange. It is very definitely debut from their very worthy successor and it enthralled me in the same way as many of their novels did – using the crime genre to explore the way that women are judged by society if their sexuality or conduct is viewed as unacceptable in the eyes of the people around them and making you think hard about parenting, gender roles and domestic abuse in a way that never interferes in the telling of a bloody good story.

Readers seem to have had a really fantastic response to the flawed, compelling main character, Alison who is so adept at the finer details of her legal cases and so adrift in her own domestic arrangements, and I think this pays testament to how fantastic Harriet Tyce’s writing is. People seem to be reacting to Alison’s character as if she is a real person;  drawn in by her chaotic and messy story, refracted through the eyes of those around her who all have their own opinions of her as a wife, a mother or as a legal force to be reckoned with. At times, I was so involved in what was going on that I did forget that this was a work of fiction – and don’t even get me started on her husband, Carl…

Harriet Tyce draws us into her Alison’s turbulent world whilst holding us at arms length too, which Alison does to everyone – having a double life as a respectable lawyer, wife and mother, alongside her illicit affair with the unobtainable and sexually magnetic Patrick takes a lot of juggling and self control and it is easy to see how difficult it is for Alison to keep all the strands of her life separate and keep her head clear for the complex murder case she has been waiting for her entire career.  The mystery at the heart of the case is cleverly handled and allows us to draw us closer to the truth whilst never really seeing what is creeping up on the perimeter of the story.

I found myself turning back to the start of the book to see the clues that were there all along in this delightfully twisted tale. Harriet Tyce skilfully leaves us with enough crumbs to navigate our way through the story whilst at the same time, leaving us as vulnerable to manipulation and deceit as some of the novel’s characters. You definitely need to work a little for yourself in the reading of this novel and the scattering of the clues is done so very skilfully that it is incredible that this is her first novel. It deserves every single word of the praise it has been garnering since its launch and is definitely going to be one of those books that you start seeing absolutely everywhere.

Harriet Tyce is incredibly talented. She draws the reader into Alison’s disturbing and disorientating world and forces you to experience these events with her. Whether you can retain sympathy for her flawed and imperfect character will be a very personal response and this is one of the novel’s key strengths: Blood Orange forces you to respond to complex moral issues in a complex way – and once you’re drawn into Alison’s story, it won’t let you go without a fight.

Thank you so much to the lovely Anne Cater for inviting me on the Blog Tour for this absolutely unforgettable read.  It’s such a gorgeous looking book that I took immense pleasure in displaying it in my #OnTheShelfie and I’m sure you’ll agree it looks absolutely gorgeous there

I loved discovering that Harriet Tyce is a fellow Scot and I am desperate to attend her event in The Edinburgh Bookshop later this month although it’s totally sold out. I’m on the waiting list and have everything crossed that a miracle occurs and I get a last-minute ticket – If you’re going, I’m really jealous!

If you don’t manage to get hold of a ticket, you can comfort yourself with treating yourself to a copy of Blood Orange here. I hope you enjoy it as much as I think you will

Harriet Tyce grew up in Edinburgh and studied English at Corpus Christi College, Oxford University before practising as a criminal barrister for the next decade.

After having children she left the Bar and has recently completed with distinction an MA in Creative Writing – Crime Fiction at the University of East Anglia.

Blood Orange is her first novel.