When Rose, a young English nurse with humanitarian ideals, decides to volunteer in the Spanish Civil War, she is little prepared for the experiences that await her.

Working on one front after another, witness to all the horrors of war, she falls in love with a Republican fighter, Miguel. In 1939 as defeat becomes inevitable, Rose is faced with a decision that will change her life and leave her with lasting scars.

Interspersed with Rose’s story is that of Consuelo, a girl growing up in a staunchly Catholic family on the other side of the ideological divide. Never quite belonging, treated unkindly, she discovers at a young age that she was adopted but her attempts to learn more about her origins are largely thwarted.

It falls to the third generation, to Consuelo’s daughter Marisol, born in the year of Franco’s death and growing up in a rapidly changing Spain, to investigate the dark secrets of her family and find the answers that have until now eluded her mother.

I read this fantastic read during my Easter Break where I had plenty of time to immerse myself in its fascinating story. It was really gripping and I absolutely fell for its charms;  this book provided me with much food for thought about this turbulent time in Spanish history.

The Red Gene is a fascinating and immersive read, describing the lives of English nurse,  Rose and Consuelo who exists on the other side of this turbulent period in history and their tales criss-cross as war tears the country apart. It is a time period that I don’t really know that much about and I love this kind of novel, where I finish it and end up on Google for hours, researching all of the events in the book and looking at maps and photos of the real settings and events that have been portrayed in its pages. ‘Quite simply, this is an enthralling novel with real historical heft.’ – Judith Keene

‘This is a touching tale of motherhood under pressure: of love, loss and reparation… a fascinating read’ – Jane Sullivan

‘An evocative story of Spain set against the background of civil war and its aftermath.’ – John Simmons, author of Spanish Crossings

This gripping novel takes us back in time to 1939, where Rose falls for the charms of freedom fighter, Miguel far from the safety and certainties of home. Love blooms amidst the turbulence of war but little does Rose know what fate will have in store for them as the war rages on around them. I loved the character of Rose and I found it easy to connect with her as she battles to overcome the many obstacles that she has to endure in the traumatic situation they find themselves in. The decisions that she makes have enormous ramifications for herself and for others and you cannot fail to be moved as you read on and imagine yourself in her situation.

If you follow my blog, you’ll know that I really love a novel where you explore events from more than one perspective.  I think that Lamplugh is equally skilled at portraying the characters of  Rose and Consuelo and their characters both spring to life for the reader as you get so involved in their stories. Lamplugh paints a vivid portrait of their struggles to survive in a dangerous and unpredictable time in history. I hate including spoilers so all I’ll say is that Rose’s idealism definitely puts her in situations in this historical period where going with your heart rather than your head can put you in situations that we can’t even imagine and there are several tense moments when your heart will definitely be in your mouth.

The way that this epic novel brings the horror and anguish of war and its effects on human lives so vividly to life on the page made me totally lose myself as I luxuriated in this read over Easter. I just couldn’t tear myself away from the suffering that was endured by so many people at this time in Spain and even though Lamplugh pulls no punches, her descriptions are moving rather than disturbing as she opens your eyes to a war that you might not know very much about. The fact that my friend has a family connection with these events lent The Red Gene an added poignancy for me and made me realise that even though this is a novel, the stories it tells were very much a reality for thousands of Spanish people and their sympathisers – who found themselves trapped in a conflict that they were powerless to do anything about.

If you love a historical read that brings moral dilemmas vividly to life and enjoy being totally immersed in a powerful and vivid narrative then you’ll love The Red Gene It’s a powerful story and I found myself quite emotional as it drew to a close, knowing as I did that even though Rose and Consuelo were fictional characters, they’d really lived for me whilst I was lost in the book.  I will definitely look out for more from Barbara Lamplugh as the balance of historical detail, wonderful characterisation and emotional punch was a winning combination for me.

I would like to thank Kelly Lacey for inviting me to participate in the blog tour – I think that The Red Gene looks fabulous in my #OnTheShelfie and  I’ll definitely be looking out for the other blog posts to see what my fellow bloggers thought of this emotional and memorable tale. 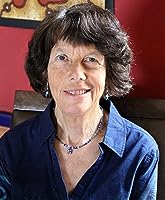 Barbara Lamplugh was born and grew up in London. An experienced traveller, she described her journeys in ‘Kathmandu by Truck’ and ‘Trans-Siberia by Rail’ published by Roger Lascelles.

In 1999, spurred by the challenge of living in a different culture, she headed for Granada in Spain, where she still lives, inspired by views of hills and the Alhambra from her sunny terrace.

A regular features writer for the magazine ‘Living Spain’, she has also written for ‘The Guardian’, ‘The Times’ and published her first novel Secrets of the Pomegranate in 2015.

One thought on “The Red Gene – Blog Tour”