As India hurtles towards Partition, in Lahore’s ancient inside city, Amrau Dar is not thinking about politics. She is waiting for a prediction about her son, Awais, to come true. Awais discovers not a secret garden but a secret city and his beloved sister, Maryam, discovers the world of maths. Fearing that the prediction has gone wrong, Amrau takes a series of decisions that will change all their lives.

‘The Inside City is a bold and vivid evocation of times and places on the fringes of our memories; a multi-patterned screen that reveals, through the secrets, mysteries, loves and tragedies of a multitude of characters, the inner life of a nation. A compelling and hugely entertaining debut.’ – Aamer Hussein, author of Another Gulmohar Tree

‘Brimming with compassion’ – Mohammed Hanif, author of A Case of Exploding Mangoes

Anita Mir’s novel just GOT me. I read it from cover to cover on a hot sunny Sunday and it promptly zoomed it into my top reads of 2019. Sometimes you just connect with a book as the character and the writing just intersect with your way of looking at the world and this captivating debut novel really stole my heart this Easter break. 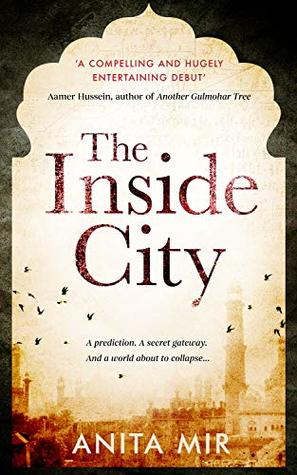 I was initially tempted by the gorgeous colours of the front cover and the fact that it was set in the distant and exotic setting of Lahore made me desperate to read it. Last weekend saw me reclining on the decking in the garden totally immersed in this immersive and gripping story and engrossed in this beautifully realised world.

The writing is superb, capturing tiny details that immerse you in the gorgeous setting and wonderful world of Lahore and explore it alongside Awais and see if the prophecies given to his mother, Amrau come true – wondering how things will change for them after he discovers the lost 13th gateway of the city and what lies behind it.

The Inside City’s delicate use of language allows us into Awais’ world, finding out fragments of information about the prophecy – which this is a tantalising way to ensure that we keep on reading to find out exactly what will transpire in the turbulent and often dangerous world of partition-era Lahore. It was interesting to discover that Anita Mir has also written drama– but this definitely goes a long way to explaining how accurately she conveys the dialogue in this novel and her portrait of a unique city is wonderfully done as a fascinating and compelling backdrop to their story.

Maryam his sister was my favourite character and I loved the way this novel has a colourful cavalcade of characters which spreads the world of Lahore at your feet and makes you feel like you are experiencing this beautiful but turbulent city yourself vicariously. I also loved the way that Anita Mir keeps lots of the ramifications of the prophecy and the decisions that have been made only gradually revealed to us to draw us into the story and keep turning the pages, immersed within Amrau, Maryam and Awais’ world.

This is a powerful, affecting and evocative read that I wholeheartedly recommend. I hate spoilers so all I can say is you just HAVE to read it for yourself. Thanks so much to Anne Cater & Unbound for the copy. I have just the friend to gift it to now that I’ve finished and I know that she’ll love it just as much as I did.

I can’t believe it’s her debut novel and can’t wait to read more of her finely drawn portraits of Lahore life. She’s a talented writer and definitely one to watch.

Anita was born in Lahore, Pakistan and came to England when she was four. She grew up in County Durham and Wales, and it was only when she moved to Lahore with her family in her late teens that it hit her that mornings weren’t supposed to be pitch black. Pakistan was a shock. And she stayed in shock. Is perhaps still in shock. But it was also love at first sight. Lahore Lahore hai/ Lahore is Lahore. Yep. Another thing that doesn’t quite translate.

Straight out of university, she applied for a job at a newspaper and for some strange reason, got it. Most of her work there was on human rights issues, particularly those pertaining to religious minorities and women. Her lighter pieces she wrote under a pseudonym, which, seven years later, her boss told her she d spelt wrong.

Anita kept on coming back to England then to Pakistan then…and one day (still plan-less), just stuck it out in London.

She writes fiction and plays, has had two shorts on (The Space and Soho), been longlisted for several prizes (The Bruntwood, the Soho/Verity Bargate, the Old Vic 12), and had a short story published this year in New Welsh Review . She likes hearing her director friends tell her, Any minute, you re going to break through . In her more reflective moments, of which there are now few, she wonders what she s supposed to break through to. And if, when she does, she ll like it.

Anita lives in the un-trendy part of East London and when not teaching, can be found playing basketball with her boy, or else, pouring over Lego instructions with the zeal of someone who s going to grow up to be a YouTube star.

One thought on “The Inside City Blogtour”