No one else knows what happened that summer. Or so she believes . . .

Grace first came to France a lifetime ago. Young and full of dreams of adventure, she met two very different men.

Until one summer night shattered everything . . .

Now, Grace is living an idyllic life with her husband, sheltered from the world in a magnificent Provençal villa, perched atop a windswept cliff.

Every day she looks out over the sea – the only witness to that fateful night years ago.

Until a stranger arrives at the house. A stranger who knows everything, and won’t leave until he gets what he wants.

The past and present spectacularly collide in this gripping story of love and betrayal echoing across the decades.

If you love a historical epic, then The House on the Edge of the Cliff might be your new favourite read. I love books that carry me across time, weaving skilfully between the past and the present and Carol Drinkwater manages this superbly, leading us between the Parisian student protests of the 1960s to modern day discussions about Brexit with skill and

I love books that transport me in time and place and I read this during the lovely weather that we’ve just had across exam season– totally losing myself in balmy Provence at times as Carol Drinkwater’s fantastic sense of place is so deftly realised in this immersive read.

But even beautiful Provence is no refuge from the past and now in the present day, Grace has to face up to things from that Parisian Summer that she might prefer to forget. This book is set in two very diverting periods and I felt that they were both drawn with equal attention to detail and I happily moved between them in the novel.  I really enjoy it when books let me see  historical periods through the eyes of the same characters and the fact that we see Grace’s life from several different perspectives was fascinating and really kept me engrossed.

The House on the Edge of the Cliff opens with the upheaval and dissent of the student protests and Grace thinks that her present day life is wholly separate from the turbulent events that happened back then. The elegant and carefree life that she has built with Peter and her children cannot be put at risk for things which happened so long ago.  But as Grace discovers to her peril, sometimes the past refuses to be neatly laid to rest. Each of the succeeding episodes in the novel drip freed us more information about  what Grace might have experienced in her youth – and how her innocence then might jeopardise her entire life now. .  This narrative form was very more-ish and several nights kept me up much later than I’d intended with a real sense of ‘just one more chapter…’

The strong plotting and skilful characterisation combine to draw you into a story bursting with secrets and the stunningly evocative setting – where you could swear that you can hear the Mediterranean beating off the shore all combine to keep you turning the pages. I really liked the way that we are left to discover things for ourselves and the novel credits the reader with a bit of intelligence, rather than spelling everything out straight away as we follow events to their moving conclusion. It’s hard to write about The House on the Edge of The Cliff with no spoilers, but I’ve tried really hard as this is a book that you really need to experience for yourself.

If you like a historical saga,  you’ll love this book and I know that my mum’s definitely going to be pinching it from me for her holidays. I’d like to thank Sriya Varadharajan at Penguin for inviting me to take part in the Blog Tour, I’m sure you’ll agree that it’s a fantastically enticing summer read that will be hard to tear yourself way from once you get started. 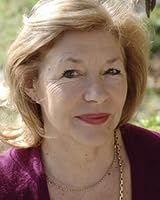 Anglo-Irish actress Carol Drinkwater is perhaps still most familiar to audiences for her award-winning portrayal of Helen Herriot in the BBC series All Creatures Great and Small. A popular and acclaimed author and film-maker as well, Carol has published nineteen books for both the adult and young adult markets. She is currently at work on her twentieth title.
When she purchased a rundown property overlooking the Bay of Cannes in France, she discovered on the grounds sixty-eight, 400-year-old olive trees. Once the land was reclaimed and the olives pressed, Carol along with her French husband, Michel, became the producers of top-quality olive oil. Her series of memoirs, love stories, recounting her experiences on her farm (The Olive Farm, The Olive Season, The Olive Harvest and Return to the Olive Farm) have become international bestsellers.

Carol’s fascination with the olive tree extended to a seventeenth-month, solo Mediterranean journey in search of the tree’s mythical secrets. The resulting travel books, The Olive Route and The Olive Tree, have inspired a five-part documentary films series entitled The Olive Route.

Carol has also been invited to work with UNESCO to help fund an Olive Heritage Trail around the Mediterranean with the dual goals of creating peace in the region and honouring the ancient heritage of the olive tree.